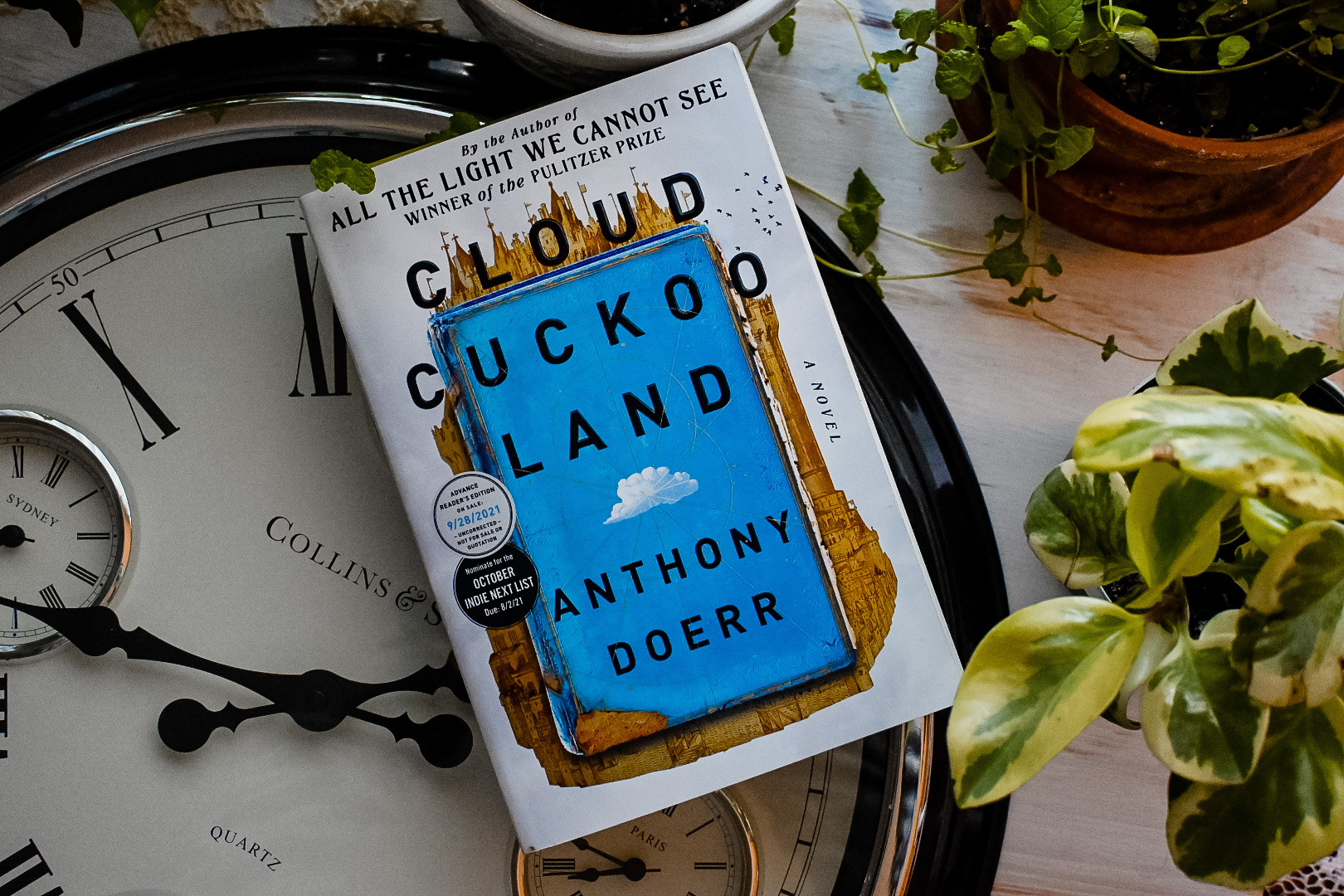 Thirteen-year-old Anna, an orphan, lives inside the formidable walls of Constantinople in a house of women who make their living embroidering the robes of priests. Restless, insatiably curious, Anna learns to read, and in this ancient city, famous for its libraries, she finds a book, the story of Aethon, who longs to be turned into a bird so that he can fly to a utopian paradise in the sky. This she reads to her ailing sister as the walls of the only place she has known are bombarded in the great siege of Constantinople. Outside the walls is Omeir, a village boy, miles from home, conscripted with his beloved oxen into the invading army. His path and Anna’s will cross.

Five hundred years later, in a library in Idaho, octogenarian Zeno, who learned Greek as a prisoner of war, rehearses five children in a play adaptation of Aethon’s story, preserved against all odds through centuries. Tucked among the library shelves is a bomb, planted by a troubled, idealistic teenager, Seymour. This is another siege. And in a not-so-distant future, on the interstellar ship Argos, Konstance is alone in a vault, copying on scraps of sacking the story of Aethon, told to her by her father. She has never set foot on our planet.

Incredibly unique, ambitious, and intriguing. Thank you to Book Club Favorites at Simon & Schuster for the free copy for review. I’d recommend it to anyone looking for something quite different, as even within the sci-fi, speculative, genre, I don’t think I’ve read one with so many types of perspectives of different people types in the format and timeline it was served in. Different in the sense that stories come together in an interlocking way, each with a different theme, style, timeline, setting, and outlook on life with very different personal stories. Would make a great book club discussion as the themes touch on a lot of speculation of human behavior that I think readers would find interesting to talk about.

The Story
Read like a playwright, which I found was an element purposely at that. Each story was interwoven highlighting human nature, animalistic qualities, and journeys through life that teeter on aspirations, warnings, and tragic aftermath. I really enjoyed the library scenes, story preservation, and the Constantinople scenes.

I loved the cleverness in the interconnectivity of stories within a story. It was a lot to read through but crafted well. I was terribly confused at first, and I’m still not sure I fully understood all of it, but enjoyed it for what it was anyway.

The Writing
Some of the detail I really enjoyed. But then became a lot of details. I didn’t really know what to do with all of them. I got a bit overwhelmed at times and found myself speed reading through certain chapters just to get to the gist of what was going on whether it added to the characterization, plot, or scene. I felt myself sifting through a lot of words to get to something actionable.

I ended up starting over several chapters in and trying the approach of sticking with one POV for the first 1/2 of the book until “I got it” which I think helped me keep the 5 characters, changing timelines, and settings correct.

Certain aspects of the writing were engrossing. I liked the poem stanzas. They were more to the point, more to my liking. Though some of my interest was limited when everything had to have a name, description, and connection to the point that I felt like I read a lot of words without learning anything. I would read on, become intrigued, then bored with detail, then interested again. It was a repeat cycle of a reading experience for me.

I think I would have enjoyed this as a book club or buddy read because a recap half way through would have helped me to understand it better, like pausing a movie and asking everyone, “So let me get this straight…”

I’m still not entirely sure if I got it all, though I really enjoyed specific scene and character elements, enough to draw somewhat of a conclusion.

I will look forward to more.