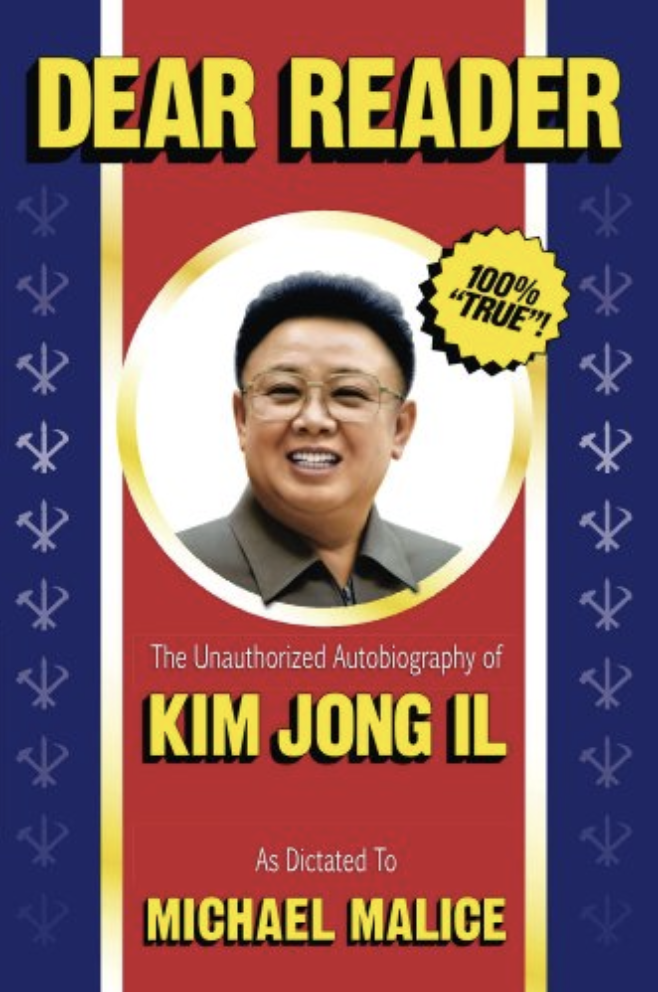 No country is as misunderstood as North Korea, and no modern tyrant has remained more mysterious than the Dear Leader, Kim Jong Il.

Now, celebrity ghostwriter Michael Malice pulls back the curtain to expose the life story of the “Incarnation of Love and Morality.” Taken directly from books spirited out of Pyongyang, DEAR READER is a carefully reconstructed first-person account of the man behind the mythology.

From his miraculous rainbow-filled birth during the fiery conflict of World War II, Kim Jong Il watched as his beloved Korea finally earned its freedom from the cursed Japanese.

With nothing left uncovered, drawing straight from dozens of books, hundreds of articles and thousands of years of Korean history, DEAR READER is both the definitive account of Kim Jong Il’s life and the complete stranger-than-fiction history of the world’s most unique country.

But that’s only the beginning of the Dear Leader’s story. In DEAR READER, Kim Jong Il explains: How he can shrink time Why he despises the Mona Lisa How he recreated the arts in Korea Why the Juche idea is the greatest concept ever discovered by man How he handled the crippling famine Why Kim Jong Un was chosen as successor over his elder brothers.

This was so cleverly written. Made me think all sorts of thoughts. I wanted to understand more historical context and I love a bit of satire in the way it was written as an autobiography. I learned a lot. I enjoyed it at an audiobook, narrated by Marcus Freeman who was easy to listen to. I’d recommend it to anyone wanting understand some of the subtle and overt nuances associated with Kim Jong Il’s life and dynasty. I think it would make for an interesting book club discussion.

The Story
Malice shapes the story well with endless exploration about subject matter that only reinforces itself with its own existence.

I didn’t always keep the family straight but I appreciated it anyway.

Topics that stood out to me:

-Mona Lisa germ warfare.
-The house divided against itself.
-Thoughts on collectivism.
-Love for books.

-What it means to be Korean. 4 shared languages, geographical, economical, and other principles.

-Thoughts on Leninismn.
-Making the world same from a democratic people.
-Greatness incarnated in a man.

-Music as Korea’s gift to the world.
-The Korean film industry.
-U.S. imperialist on film.

-One of the first places mankind originated.
-Thoughts on reunification.
-His prestige abroad.

-War provocation and the chopping of the poplar tree.
-Marshal law.

-Caring about the spectacle but not the people.

The Writing
Malice wrote like a James Michener book. There was this historical context told alongside dialogue that kept the interest going. The word unprecedented was overused. And same as the story, I didn’t alway keep the timelines and family straight would have liked a bit of differentiation amongst father and son, but again I appreciated it anyway.

I liked the recap at the end.

Overall, it made me think a lot and I added a lot of North Korean films to my movie watch list.