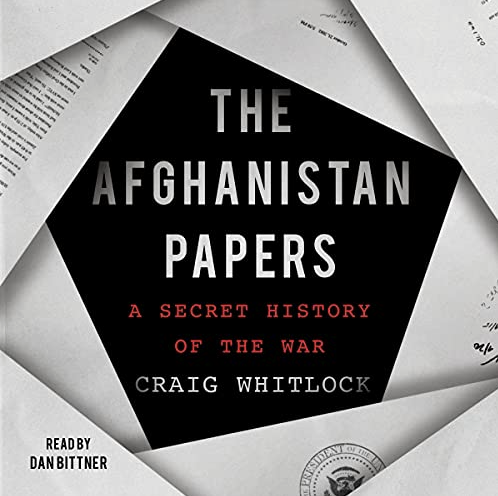 The groundbreaking investigative story of how three successive presidents and their military commanders deceived the public year after year about America’s longest war, foreshadowing the Taliban’s recapture of Afghanistan, by Washington Post reporter and three-time Pulitzer Prize finalist Craig Whitlock.

Unlike the wars in Vietnam and Iraq, the US invasion of Afghanistan in 2001 had near-unanimous public support. At first, the goals were straightforward and clear: to defeat al-Qaeda and prevent a repeat of 9/11. Yet soon after the United States and its allies removed the Taliban from power, the mission veered off course and US officials lost sight of their original objectives.

Distracted by the war in Iraq, the US military became mired in an unwinnable guerrilla conflict in a country it did not understand. But no president wanted to admit failure, especially in a war that began as a just cause. Instead, the Bush, Obama, and Trump administrations sent more and more troops to Afghanistan and repeatedly said they were making progress, even though they knew there was no realistic prospect for an outright victory.

Just as the Pentagon Papers changed the public’s understanding of Vietnam, The Afghanistan Papers contains startling revelation after revelation from people who played a direct role in the war, from leaders in the White House and the Pentagon to soldiers and aid workers on the front lines. In unvarnished language, they admit that the US government’s strategies were a mess, that the nation-building project was a colossal failure, and that drugs and corruption gained a stranglehold over their allies in the Afghan government. All told, the account is based on interviews with more than 1,000 people who knew that the US government was presenting a distorted, and sometimes entirely fabricated, version of the facts on the ground.

Documents unearthed by The Washington Post reveal that President Bush didn’t know the name of his Afghanistan war commander—and didn’t want to make time to meet with him. Secretary of Defense Donald Rumsfeld admitted he had “no visibility into who the bad guys are.” His successor, Robert Gates, said: “We didn’t know jack shit about al-Qaeda.”

The Afghanistan Papers is a shocking account that will supercharge a long overdue reckoning over what went wrong and forever change the way the conflict is remembered.

The Afghanistan Papers: A Secret History of the War by Craig Whitlock

Wow was this book comprehensive! It really satisfied my wondering of a lot of events. I listened via audiobook, narrated by Dan Bittner who was excellent. Clear and precise, I liked his voice inflection. I’d recommend this book to anyone. It’s great for anyone just learning the history of Afghanistan from a social, economic, and political standpoint as well as anyone curious as to what has gone on for the past 20 years, whether it relates to certain characteristics about the country, civilians, jihadis, military operations, or terrorists.

Topics I Spent a Lot of Time Thinking About:
-The complexities of the War in Afghanistan.
-High value targets.
-Post war occupation.

-What motivated enemies to fight, how they went about finding and identifying the enemy.
-Refuted operations.

-1/3 at risk for salvation.
-The buildings and barracks built to support them. Examples of all sorts of hazards where cultural norms did not mesh with one another. Examples such as mistaking urinals for drinking fountains and toilets, draping soaking clothes over electric heaters, uniforms came in a variety of sizes, never having had their feet measured and different sized footwear.
-What was the expectation and goal in educating and assist the poorest and least educated in the world?

-Post 9/11 response.
-What was the strategy?
-What was the goal?
-An attack about a group no one knew anything about.
-Who exactly had advanced knowledge of the 9/11 attacks?
-The hazy idea of who anyone was fighting. Who exactly were the terrorists?
-Why did anyone want to defeat Al Qaeda? The Taliban?
-Was was everyone’s understanding of what their motivations were to fight? Capabilities?

-Complex tribal dynamics.
-What was required to help rebuild the country after U.S. intervention, following the bombings in October, 2001?
-What was the underpinning of building a systematic government in a country that doesn’t operate that way?
-Interesting outcomes and analysis of countries such as Haiti, Balkins, and Somalia.
-Nato forces and scrutiny.

-Opium. The history of opium poppy cultivation, cash crops, interventions, what does and doesn’t result in drug related crime. Why opium? Why would they continue to produce 90% of the world’s illegal opium?

-What was foretelling.
-Corruption and sabotage of the war.

-Burying the extent of the problem.
-Audits.
-Entanglement new tactics.

It’s one I could listen to over and over again and always come out learning something new.

0 comments on “The Afghanistan Papers: A Secret History of the War by Craig Whitlock, The Washington Post”