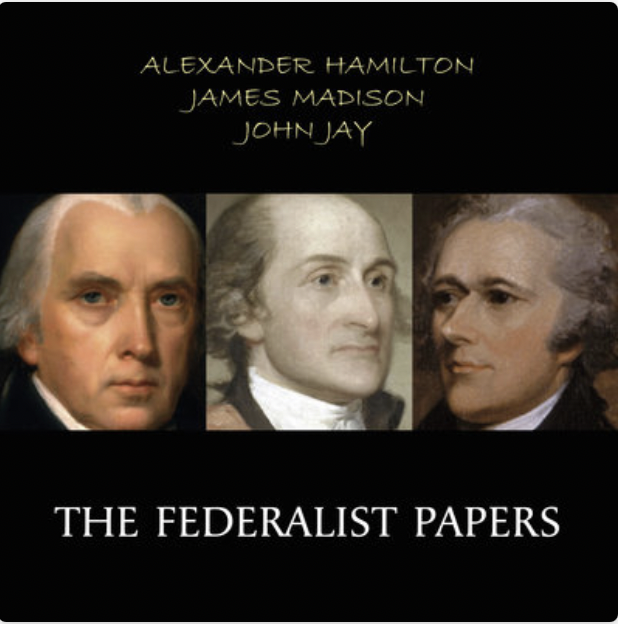 Hailed by Thomas Jefferson as “the best commentary on the principles of government which was ever written”, The Federalist Papers is a collection of eighty-five essays published by Founding Fathers Alexander Hamilton, James Madison, and John Jay from 1787 to 1788, as a means to persuade the public to ratify the Constitution of the United States.

With nearly two-thirds of the essays written by Hamilton, this enduring classic is perfect for modern audiences passionate about his work or seeking a deeper understanding of one of the most important documents in US history.

AmazonClassics (e-book) and Libro.fm (audiobook) brings you timeless works from iconic authors and at both sites you can get this book for free! Ideal for anyone who wants to read a great work for the first time or revisit an old favorite, these new editions open the door to the stories and ideas that have shaped our world.

The Federalist Papers by Alexander Hamilton

Really thought this was great. Incredibly insightful. I had only read a few essays in school so reading this as a compilation from start to finish was incredibly eye-opening. I listened to it as an audiobook, narrated by multiple narrators, Kim Braun, Robert Scott, Scott Mather, and Susan Denney, I would highly recommend. I quite enjoyed even the lower sound quality, and the variety of voices. Though I had to skip a huge section around track 23. The tinny poor sound quality and narration was peanut butter and jelly sandwich with a shot of Vodka. I actually liked the less polished aspect of the collection, but this one was really difficult for me to understand. I’d recommend this book to anyone. It is exactly what the description says, “the best commentary on the principles of government which was ever written.”

It was so rich in content. The founders thought of everything. They were such visionaries, yet gave a lot of though the the implementation of a well-ran government and how it would empower the people to protect rights and freedoms.

As a collection of 85 essays, they all have their place, as their purpose was to persuade the public to ratify the Constitution of the United States.

It’s interesting to think that these papers were often given as copies weekly to people. I think it would be fascinating to have a resurgence of such a thing.

-This process in place to keep accountability, to established truth, reduce hostility between the states. What measures are in place to protect and prevent the disunity within the union? How to prevent factions, meaning the union from breaking apart.

-It defined boundaries and principles of friendship and enmity. Contrasts of tyranny and anarchy. What was already thought of when it comes to internal civil conflict. The several ways that could lead to the dissolution of the union.

-Why there was hope for the United States to be so successful such as protecting the country, recognizing how it is insulated and secure, geographical advantage, distance, and shores.

-The differences between values of freedom and resources.

-What is the understanding of freedom?
-Forcing freedom.
-What it means to be victim to the power of a single man.
-Why isn’t the country a pure democracy vs republic?

-What issues would be considered regressive today? How do you prevent government overreach?
-Why even protect individual freedom and what’s the reason behind maintaining small government?
-It covered ideas about necessary legislation and how to avoid corruption or serving persona interest over the good of the whole.

-National security mission, what was is the goal?
-How to not succeed to the mercy of foreign powers.

-Also in contrast what would be unfit for self-governance.

-I liked this bit about alliances and their purposes: treatise and alliances, may war and peace, raise armies and equipment fleets. Quotas and demand contributions. Concepts I myself don’t really always give as much thought to as I probably should.

-Sanctions a requisite, ambassadors, why duties on imports and exports matter, the regulation of the mint and and fortifications, preventing foreign influences as protection, and why this is so important.

-How the rich can be extravagant while recognizing how the poor, frugal might be represent disproportion in states and how to address union inequalities.

-Diet and religious practices, as well as important concerns which separate communities, and how they can live under one country.

-Why even have these in the first place? So that the government doesn’t infringe and why is that so important.